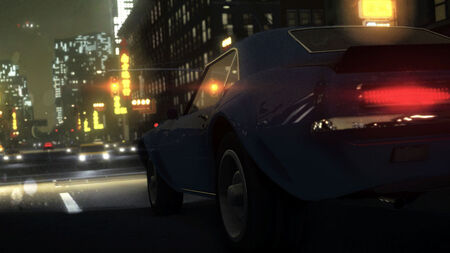 Skills are individual talents held by a chosen driver in The Crew which can alter the course of an entire race.

These challenges are arcade-oriented mini-games peppered across the world that will put your driving senses to good use. They trigger as you drive through them and can be tackled from any direction. When you complete a Skill your personal best is saved as a ghost so you can race against it and try to smash your own score. You can even come back in a different spec and take sneaky short cuts your foolish former self didn't think to take. And if you get tired of beating your own scores you can always race your friends’ ghosts or the world record and whup their hides even when they’re not online.

Hope you have a head for heights. In Climb Skills the aim is to get your car as high as possible in the time limit. For those who like to rush in you might want to do some research before you start - it’s a good idea to pinpoint the highest point you can see, figure out the most direct route to it and pick a vehicle spec to suit, or you aren’t going to get very far. Looking to bag some Bonus Points? Then keep your eyes peeled for the flag on the way up. Better shift it though, the flag loses points over time.

It’s that fight or flight moment, but your only option is flight… In Escape Skills your aim is to get as far as possible from the marker within the time limit. You can trigger this Skill from any direction so you might want to scope out your escape route first and choose a vehicle spec that’ll give you the fastest and straightest route out of there. The further away you get the higher your multiplier, so keep the pedal to the metal every step of the way.

It’s time to see how well you can stick to a racing line. The aim of Follow Skills is to stay on the line for as long as possible in the given time. The longer you stay on the line the higher your multiplier gets and the thinner the line becomes – all you’ve got to do is avoid straying off of the line. If you do your multiplier resets and the line goes back to its starting width, and you want to avoid that.

Looking to rack up some air miles? You’ve come to the right place. The aim of the Jump Skill is to hit a ramp, grab some hang time and land as close as possible to the center of a target before time runs out. Before you start you’ll want to line up with the middle of the ramp because you can’t control your car while airborne (who knew?) Make sure you pick the right vehicle spec for the surface on the run up to the ramp and aim for the bull’s-eye if you want to max out your points.

Ever tried threading a needle? Well the Precision Skill asks you to do just that, only with cars… and gates… The aim of this skill is to pass through as many gates as possible in the given time. The faster you pass through them the more points you receive so choose your fastest car and keep the hammer down at all times. The catch is that as you pass through successive gates they shrink in size, so threading that needle becomes harder, but the bonus increases each time. Oh, and missing a gate or hitting something resets the bonus, so keep your focus.

It’s time to go hunting. The aim of the Scramble Skill is to hunt down and collect as many items as possible in the given time - it’s all about speed, accuracy and awareness. These collectibles could appear on-road or off-road - sometimes depending on the direction you trigger it from - so make sure you bring the right car for the job. Collecting items increases your total number of points and the items lose points over time so you have step on it if you want to get the max score. It’s open season on these items so grab your hunting gear.

You’ve heard of slalom skiing? Well this is sort of like that, only with cars, not skis. The aim of the Slalom Skill is to weave through as many gates as possible in a given time limit. You’ll need to call on all your skill and precision for this one as the closer you are to the post when passing through a gate the more points you receive. Passing through successive gates increases the bonus, but missing a gate or hitting something resets it, and that’s bad.

Want to hazard a guess at what the aim of the Speed Skill is? Well, it’s pretty simple - just grab the fastest car you have, stomp your foot down and drive as fast as possible in the time limit. As long as you stay above a minimum speed your multiplier will increase, so keep an eye on the speedo. Things to avoid: going below the minimum speed, going off road and hitting stuff – doing any of those things will reset your multiplier, and you don’t want that.