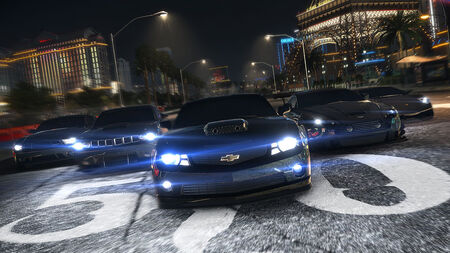 Missions are the principle way of earning new vehicles and other rewards in The Crew.

Go to. Sounds pretty simple, right? Think again. In these missions you’ve got a long way to go and a short time to get there. Your aim is to get from one point to another any way you can before time runs out – that means keeping your eyes peeled for shortcuts that suit your vehicle spec and taking the racing line wherever possible. And don’t be afraid to cut off other drivers, just do whatever it takes to reach your destination in time. Oh, and sometimes you’ve got to get your vehicle there in pristine condition, so try not to hit anything on the way.

If you’re a fan of collecting stuff then this is right up your alley. In Collect missions your aim is to pick up all the items scattered around the map as fast as your engine will allow, because if time runs out you’re done. These items could be on-road, off-road, in parks, up hills, beside lakes – basically anywhere, so you’ll need to have a close eye on your mini-map. Just keep your wits about you and ensure you take the optimum route to collect them all before the timer runs dry.

There are people out to get you and now your only option is to floor it before half the local PD or gang descend on you like a ton of bricks. Your only goal in a getaway is just that – getaway from your pursuers without your vehicle being wrecked or time running out. Your pursuers will do all in their power to stop you – helicopters, roadblocks, off-road vehicles – you name it, so to lose them you’re going to have to drive fast and drive smart. Go on-road, go off-road, cut corners, take down pursuers just do what it takes to put them in your rear view. When you’re far enough away from them you’ll start to lose infraction stars and when you’ve lost them all you’re free and clear.

It’s time to channel your inner detective. In Follow missions your aim is simple – follow one of your posse to the next hideout or tail a target until time runs out. Actually doing this isn’t quite so straightforward, while your accomplice may go easy on you, other targets generally doesn’t appreciate being followed and won’t make it easy for you. They’ll use every evasive manoeuvre they know and max out their speed in an effort to leave you in their dust. Falling behind is not an option, you drop too far back for too long and they’re in the wind. To keep up you’ve got to anticipate their movements and take shortcuts where necessary.

Your car is your weapon. There are many like it, but this one is yours. In Takedown missions you get to put that weapon to good use as you chase down and stop a bad dude or dudette. To stop the target you need to use your car like a battering ram to damage their vehicle enough before time runs out. If you’re low on time or want to end things quickly you can always try to anticipate their route, head them off at the pass and T-bone them for maximum damage. Just make sure they don’t get too far ahead because if you lose sight of them for too long then you lose sight of them for good.

Don’t worry, there’s no actual running required in an outrun. These missions are all about you and your car versus the clock. You’ve got a destination to reach and not enough time to get there – the only way you can make it is to pass through checkpoints on the route and add some precious extra seconds to the clock. Checkpoints can be on-road, off-road, between houses, in a forest, up a mountain – anywhere, so keep your eyes open for the next one and try to take the most direct route you can find. Just watch out for trees and stuff.

If you like fast cars, tire smoke and the roar of engines then races are for you. Your aim in Race missions is – what else? – to win. Races can take place on-road, off-road, in cities or even in the snow, but whatever the surface the best way to win is to floor the accelerator, take the racing line and beat down any other drivers foolish enough to come close. The number of opponents can vary from 1 to 7 but don’t let that put you off, it just means there’ll be more to see in your rear view mirror.